Don’t listen to me. I’m a college kid. I’m too idealistic.

No one knows enough when they’re 20. Last year this blog was about my experience abroad, but this time I’ll be participating in TDC from a college campus; a bubble sheltered from global poverty. Here, we college kids take on worldly issues almost as if we know what we’re doing. We’re going to school – we must be smart – so we must have a point. Yet by definition, we have less experience than everyone older than us. In some cases students are more familiar with a problem because they grew up near it, but on the whole college kids just haven’t been around long enough to get the whole picture. So we hear, “Why should we listen to a bunch of…” naïve youth, idealistic youth, radical youth? 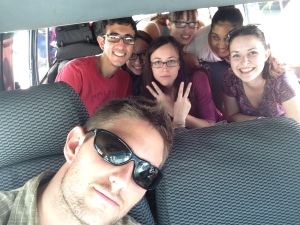 Indeed, why am I yelling about poverty when all I know is what’s in my textbook? Three things come to mind, first and foremost our strong opinions aren’t out of the ordinary. Everyone has an opinion from the moment they can understand it as children. We just came to an agreement with Iran over nuclear development and someone reading about it in the paper for the first time might have just as fierce a stance as an official in the State Department. One is less educated about it and the other more, but the passion is there. Trust me, we are reminded of how little we know about things every time we apply for a job or an internship.

In terms of our methods, we may seem a little extreme at times; forcing ourselves to be tired, hungry, and sleep deprived during TDC seems like it might be a little drastic to raise awareness about poverty. Why not give more of your time volunteering as an aid worker than sitting around with grumbling stomachs?

Well, right now I’m not being an aid worker, I’m being a student. That’s what I’m at UMW to do, but studies show students are adamant about having an impact in the world. It just so happens I found a much more corporeal way to discuss the issue of poverty on campus, which seems like more of an investment than simply chucking a chunk of change at La Ceiba Microfinance from behind a dry library book. For those of us with a career or other fish to fry, this is usually the way to contribute (not against donating, please donate), but my point is that this doesn’t make TDC on a college campus extreme. Extreme might be dropping our degrees and packing our bags for a favela. That’s not what us college kids are doing, instead we’re investing ourselves in the problem in the way we can – a personal challenge on a global issue.

But this doesn’t solve the problem that we are still less experienced, and my third point is to say that’s how it’s supposed to work. Aid isn’t instantaneous. We develop ourselves so that we don’t screw up trying to develop the world. There’s a reason we look back on life and think “man I was young and stupid back then.”