A Most Interesting Conversation

September 16, 2015 · by Jeff Paddock · in Microfinance in Honduras · Leave a comment

In June, a deaf kid approached me under a small apple tree.

I had no idea who he was nor why he was trying to sign to me. I assumed someone had told him to seek out the gringo as a joke. I politely mimed I wasn’t the right person and took my leave.

In July I sat in my neighbor’s apartment. He had invited me over for his moving out party. Then, one by one, him and his friends went into the back room and came out cross dressing as women.

I did not expect this.

I stayed until they got up to leave and politely said I could not go to the bar with them and went home instead. I did notice, however, that my neighbor could sign as he communicated with a deaf member of the group.

As time went on, I became friends with my neighbor. Since he works right around the corner from where I do, we frequently run into each other on the street. He described to me what it was like to be gay in Honduras. I talked to him about being a gringo in Honduras, which was not much of a comparison.

On September 1st I was chatting with him on the street when I felt a tug on my arm. I turned around and saw a kid I didn’t recognize. Then he started waving his hands at me. He was the same kid I had met in June.

E R I C K, he signed and I read, with the little sign language I knew. His name was Erick.

“Yes, I know this kid.” Said my neighbor. “He walks home this way when he gets off the bus. He always comes into my shop and touches stuff he isn’t supposed to.“

I noticed Erick had bus money scrunched up in his hand. Using half sign language and half general body motions and expression, Erick, my neighbor, and I had a chat.

“Who’s that girl who lives in that window there?” Erick asked.

“Her name’s Suyapa,” my neighbor replied, “Jeff works with her”

“Yes, I see them running together in the morning.”

“We go all the way around Centro.” I said.

“Here it doesn’t have battery though.”

“Well that’s useless.” He hands it back and tries to tell me something else.

“He wants to know if you have video games.” My neighbor clarifies.

“What the hell is sidewaysL?” Erick said, scrunching up his face.

“Why?” Asked my neighbor.

It struck me how crazy our three-man conversation was. The content wasn’t high caliber, nor was it very thought provoking, but it didn’t matter. It was interesting not because of what was said but because of who was saying it. The perspectives present at that moment were so diverse, it makes me smile just thinking about it.

Erick wasn’t deaf, my neighbor wasn’t gay, and I wasn’t a gringo, even though we all were. Three people, cutting through the usual circumstances, to have an interesting conversation about nothing. It made me feel suddenly – very – human. 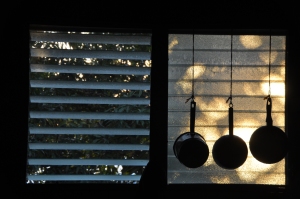