Breakfast Everyday With Someone Who Owes Me $200.

I eat breakfast everyday with someone who owes me $200.

In 2014, we lent money to an eatery in town. If you’ve ever been to Honduras, you know what a baleada is. For those who don’t know, it’s like a soft shell taco with beans and eggs. It’s delicious, and this eatery makes my favorite.

We thought this was a wonderful way to help; the business was strong and the family was close with the organization.

Unfortunately, they defaulted and we wrote it off. Relationship collateral soured the friendship… but not the food.

We still love the food.

To this day, we go there for breakfast almost every morning.

How does one approach a situation like that? Where you wake up each day, stare someone in the face and think ‘she owes me $200’? What’s more, how does she feel about it?

People have a gut reaction to this sort of thing. It makes us feel like the other party is evil or disingenuous.

Do you remember the friend who borrowed your headphones? He told you he’d give them back next week, but he didn’t. He had an excuse. He had another excuse the following week, and now it’s been three months and at this point you’ve had it, thinking maybe you should just forget about it or confront him.

What if they were $200 headphones?

What if instead of three months it’s been two years?

Many MFIs write off loans in default after 100 or 200 days late. We follow India and write it off after a full 365 days, which means I see the same red names on my computer for twelve months.

Managing arrears is an issue across the board for those who lend to impoverished communities. It causes concerns for client protection, because many groups turn to collection agencies, public shaming, and extreme penalties.

It makes sense; those were expensive headphones.

That gut reaction makes us want to act, especially if you’re trying to run a financial institution to alleviate the very poverty that prompted the loan in the first place!

Suddenly, we feel the need to hurt the very people we wanted to help.

Now and again, I have to lean back from my desk, rub my eyes, and flip the script. 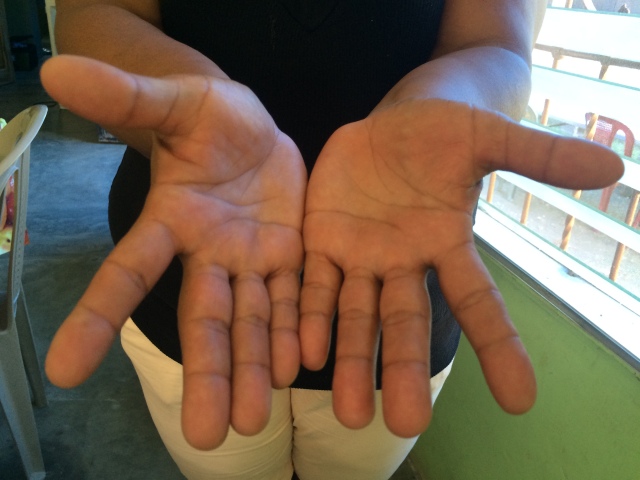 “A credit institution dedicated to serving the poor should not get worried the minute a borrower fails to adhere to a strict schedule,” says Muhammad Yunus, founder of the first MFI.

“Micro-credit programs should not fall into the logical trap of conventional banking firms and start looking at their borrowers as some kind of time bombs, ticking away and waiting to create big trouble on prefixed dates.”

I should laminate this and carry it in my wallet. It would help me get through the day, because clients always have a reason for not repaying.

People lie to me so much it should be part of my job description.

It’s hard not to see excuses as evasive, but I know if I just look over their shoulder I’d see the real reason for not making repayments.

“Circumstances can befall a poor person over which they have no control.”

Maybe their child really is ill. Maybe their husband drank it away. Maybe the meager income they had dried up. There are things you simply can’t bring yourself to reveal, not even to a friend.

As a result, we take a different approach to defaults.

We forgive it and turn it into a donation.

When they don’t repay, we shrug and say ‘heck, consider it a gift!’

We do this even for our friends at the eatery and their $200.

Studies show that donations with no strings attached may not increase income, but nutrition, psychological wellbeing, and investment in childhood education, all benefit by simply giving people money.

So, when people default, we try to cut the strings.

It’s true that “when word gets out that a lender is lenient,” says the Smart Campaign, “mass default can affect the whole market.”

Many community members see us as chumps, and just this week I’ve had three bank officials laugh in my face for this very reason. But I would rather be seen as a lenient chump lending a hand, than a money-grubbing bank scrambling for their bottom line.

Relationship collateral is a two way street, and it’s hard for clients and staff alike to carry on after a default happens.

We keep trying, though, because we understand poverty is aggravating – it’s our responsibility to be considerate.

Plus… it makes getting breakfast a lot easier…