I remember the migrant surge of 2014 when women and children began arriving at the mythical US-Mexico border.

I say “mythical” because for most of us, the border is this never-before-seen streak across the world. It marks where our laws begin and where our sovereignty starts. But few of us have actually been South to see it. I certainly hadn’t in 2014.

In 2015, I went to live in Honduras and saw the source of the migration crises, but I still didn’t have a sense of where these forces met – the frontline, so to speak. And as I continued to write on the subject, I learned about the sister-cities on either side of the border. Their names were inseparable, like a first that needs its last: Tijuana-San Diego, Brownsville-Matamoros, Juarez-El Paso. One in particular stood out as the proofing ground of the immigration debate.

The economies of Juarez and El Paso were once melded. The first military response to an immigrant crisis happened in 1954 and grew to full militarization in the 1990s. El Paso was the first to see the fences and checkpoints we know today. It became a place to beta-test policies before applying them to the entire border. I looked up from Honduras and watched Obama triple Customs and Border Patrol (CBP) in 2017. I was starting to get a sense of it.

But in 2018, things accelerated. A “caravan” was coming. We had a new president and El Paso started receiving a different kind of testing. “Zero tolerance” better known as “Child separation” hit the news and society blew up. That summer, I walked through throngs of people flooding the commons in Boston. It was hot and everyone was sweating. They thrust up signs and yelled at the sky. The mythical borderland was suddenly at the heartland of the country. 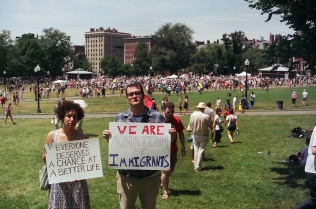 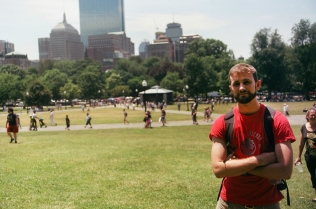 Do you remember the lump in your throat when you thought of a baby being taken from its mother? I do.

When the shockwaves settled, it was 2019. Holding facilities, which were designed and built for Mexican males in the 90s, were housing women and children who’d fled a country eating them alive. Cells with 50 people reached capacity at 150. Chain link cages were set up. Families were held under bridges. It was an “invasion” and a national emergency was declared.

In El Paso, riot police began running practice drills to physically push people back across the line—something that was never necessary. Migrants either walked across in places where there was no wall or lined up to apply for asylum. There had to be another response, but ‘child separation’ had backfired.

The Trump administration needed to rebrand, and the “Migrant Protection Protocols” (MPP) were born, the most misleading title since snake oil. It’s better known today as the “Remain in Mexico” policy. It claimed that shoving migrants back into Mexico would be the ‘humanitarian’ thing to do. And as soon as they did, the cartels swooped in like wolves waiting on a kill.

At last, in January 2020, I’d had enough of watching. I boarded a flight for El Paso. I had to know…