Robbed With A Machete And Winning

He came strutting out from behind a tree.

Before I could really absorb what was happening, he was standing five inches from me. He wore a thin facemask and a hood that covered everything except his eyes. He had thick eyebrows. His clothes were all black; black pants and cheap knock-off crocs with mud on them. He had a revolver in his belt and a machete in his hand as long as my arm.

And the old woman?

I saw her ahead of me. My traveling companion put her head down, averted her eyes, and bolted. He was obviously there for me, not her. My heart sank.

I was suddenly acutely aware of where I was: smack dab in the middle of a dirt path that ran for half a mile through a palm farm. Dark trees, as far the eye could see, created a roof of leaves over shrubby overgrowth. There wasn’t a soul in sight. It was just he and I.

My mind retreated into my skull and became a witness – watching through my eyes. I realized my hands were in the air. He took my folder and the backpack from my shoulders. His sleeves smelled damp. He was speaking. He pointed to my waist:

I threw my keys at my feet.

“Those are nothing to you.” I told him. He ignored them.

The last thing he had me do was lift up my shirt. My heart was pounding against my ribs. He looked around my belt and told me to go.

And that was that; quick and easy.

I picked up my keys and left. Glancing over my shoulder I saw him dissolve back into the trees. I walked up the road like a zombie until the old woman appeared from behind a bush. She gave me a hug.

In twenty-twenty hindsight, we always feel dumb when we get held up: you shouldn’t have been walking there, Jeff; you should’ve just pushed him and run, Jeff. He probably didn’t need a machete if the revolver had been real. That being said, I like my limbs where they are. I’m not keen on parting with them.

These are just excuses, though. We really feel dumb because we lost something we valued. Not the stuff, of course. Watches and water-bottles, phones and credit-cards, bills and back-packs, can all be replaced. What we lose is a sense of security and a sense of confidence.

That day I had been taking surveys. In my bag were six hours of work from a community within the palm. It was part of a long, hard slog to bring a savings program I had designed to that area. In one foul swoop, he had taken all of my work and compromised my presence there, essentially gutting all my plans. The confidence in my idea was gone. All progress grinded to a halt.

The machete cut my nerve, but my head hung from defeat.

The mood was dismal as I ate dinner with my friend that night. I told them, half-heartedly, that the only way to get revenge would be to get savings to that community. I didn’t believe it when I said it. I just stared blankly into my food.

It took a while to get over it. In fact, I didn’t really let it go until I saw him again. 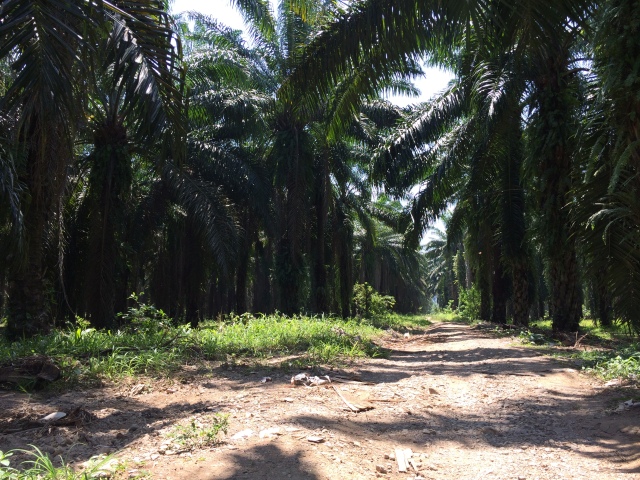 In July, I was robbed. In September, I was back in that community.

The sun beat down on us. I held a clipboard and stood outside a tin fence with my co-worker. A woman we knew well was peeking out through the gate and answering my questions. I wrote down her answers:

Yes, she wanted to participate in the redesigned savings program. Yes, she would meet me next week. Yes! She would love to open her first bank account.

It was just another day at the office, until I scratched my nose and looked down the street.

I did a double take.

It was the shape of his face. It was his stature. He had thick eyebrows. His pants were all black; cheap knock-off crocs with mud on them. He saw me too.

He passed behind my back. A chill went up my spine. The path was crowded with kids and neighbors. I said nothing. He mounted his bike and left. My face looked a little shocked when I returned to our conversation. And it wasn’t until then that I realized what I was doing.

There were many reasons not to try. It could have been hard. It might have put me at risk. It might not even work, so why try? You can’t do it without the right motivation.

That day I learned an important lesson: The difficult circumstances that cut the community off from the formal savings market – the same circumstances that put that guy in front of me – could be over come. That’s a truth of development in practice, and a tidal wave of personal growth in me.

I recognize that my ‘robbery’ was a slap on the wrist compare to what some people suffer. I am aware that many adults do more good per-capita at their NGOs, but in this small tale I was the victor.

Now it’s December. Yesterday, we concluded a pilot of the La Ceiba Subsidy Savings Program, and decided to grow it’s services into next year. Four people from that community participated in the pilot. One of those clients, who I really like, and has more drive in his little finger than I do in my whole body, shook my hand and told me that he never imagined he’d be here. He just learned he was going to have a baby, and now he has $55 ready for her, tucked safely away in a subsidized savings account.

My head burst like a confetti balloon, and all the pressure from that day in June went with it.

As it turns out, getting robbed with a machete pales in comparison to getting work done in spite of that very machete. All it takes is a handful of good people and the decision to keep trying.