December 6, 2017 · by Jeff Paddock · in Microfinance in Honduras · Leave a comment

Closure is important to me. Like the two years of my life spent in Honduras, I would like to be a short chapter of righteousness in a much longer story…

Every time I remember leaving Honduras, I get shots of anxiety in my system.

The circumstances under which we left were not normal, although extortion and death threats are quite common for NGOs in Latin America. Four directors and I were told to pay money or be killed. The ensuing 36 hours were a rush of fear, duress, and violent thunderstorms that added to the ambiance.

That short period of time comes back to me in a series of bursts, each more acute than the last.

The heat of blood rushing through my neck as I read the note. The snapping of bolts on my apartment door as I locked them. The churning of my stomach as I lied to my friend’s faces in the morning light. Not knowing whom to trust. The grip of the steering wheel under my white knuckles; listening to Sam coordinate the Special Forces from the passenger’s seat, as they left Santa Barbara. The smooth movements of shadows over the windows as I lay on the floor. The sound of footsteps outside. My watch read four AM. I was waiting for dawn and the desperate continuation of my responsibilities.

I always thought I knew what danger was, but in those hours, we found out what it was like to live without the safety net. We got a brief glimpse into a state of being where the police force is inept. Gang violence from the periphery is front and center, waiting at the bottom of the stairs. It’s humbling to realize how many people have lived this reality everyday of their waking lives. Hondurans are champions in every sense of the word.

How about this – buy me a beer and I’ll give you the full story, hour by hour; blow by blow. Some of the details appear in a summary by my friend and colleague Caroline Gray. I couldn’t have said it better if I’d tried.

The exact retelling of where I went, whom I spoke to, and what I saw, are best traded over a stiff drink and a quiet bar. What I’m more concerned about now is not the events so much as the questions, like what could I have done differently? How could I have been a better leader? Was I helping at all? Why were we in Honduras to start with? What was the point? What about those who remain? What does this mean for the effort we put in?

Having experienced raw danger, it troubles me to leave it behind. For me, adrenaline will fade to cortisol; shock to stress. And if I work at it, my nerves will eventually come down after a few more months. This is a luxury my friends in Honduras do not have. Last week the results of contested presidential election were announced in favor of the current leader and violence broke out around the country. I feel compelled to face my friends and coworkers and tell them what I contributed to improve their situation.

What was the point? To fight these evil forces… right? What does this mean for the effort we put in? I don’t know, my project is shutting down actually.

After ten years in existence, and a good five years of my life, La Ceiba Microfinance shuts down on New Years day 2018. Our lending services will no longer be available to support the communities we work with. My time, my effort, and my allegiance were all for not it seems. We lost so much sleep to make but naught a dent in economic injustice. We failed in this regard, plain and simple. The few inches we did gain will have to satisfy us. The clients whose lives we touched – and who in turn, touched ours – will live with at least the knowledge, that someone out there gave a damn about their family, even though they had no reason to do so.

This is where I find solace, and the courage to buy a plane ticket.

When I was robbed at machete point, it derailed a savings program I was attempting to bring to the community. After overcoming the obstacles it created, we launched an Incentive Savings Program for about 20 people. It recently completed it’s one year anniversary. We provided $377 in incentives. In return, clients saved $2,507 for their future. Most of them never had a bank account before or could never save enough to have emergency funds. By basic metrics, this project was a success.

This project was funded by my friends and family. This project was my baby. Now it is threatened by a much more drastic expression of evil and violence – one that forced me from the country; that contributed to our closing. Closure is important for me to move on, but it does not mean giving up on the little I can do.

This is why Honduras. This is the point.

To be thumb in the eye of economic inequality; to deny anyone the pleasure of saying ‘it’s too hard’; to act with humility in a land where I have no reason to be; to contribute one grain of ‘good’ to a world riddled with poverty.

There are those who strive to rewrite the policies and get to the root of the issue. Then there are those of us who stay in the trenches, playing medic to the real heroes who suffer the misfortune of the very same policies. I have accepted my place in the latter category. These are the exact motivations I apply with my current clients here in Boston, in my new life as a financial coach for low-income families.

In 2018, I’ve scheduled the savings program to continue for those few 20 Hondurans who participate. With a straight face, I’ll down a cocktail of inspiration and denial, and board a plane on February 14th for the Sula Valley. With just enough funds and a trusted friend named Chilo, the project will go on. I’ll do it for the sake of my friends who I worked with, who showed immeasurable bravery during those 36 hours. I’ll do it for my La Ceiba coworkers who showed kindness and modesty abroad. I’ll do it for the clients who lived without a safety net and who found it in their hearts to accept me into their circle.

But most of all, after leaving Honduras, I’ll do it, to be a thumb in the eye – a short chapter of righteousness in much a longer story…

And one that I am still writing. 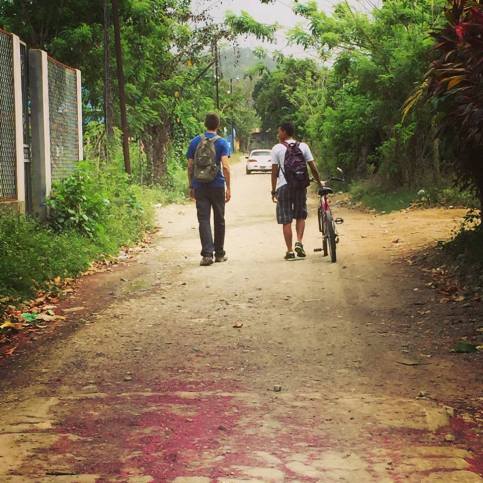 ← The Shadow Of A Community
Shipping Up To Boston →
She said yes. I love you Cary Anne