March 1, 2017 · by Jeff Paddock · in Immigration Debate, Microfinance in Honduras · Leave a comment

In the summer of 2012, I was backpacking in Arizona when I met my church group in the
sizzling streets of Phoenix. We were attending a general assembly, and one of the activities on the list was an organized protest. We mounted a fleet of school buses and headed into the outskirts of the city, where we found a stage and a growing crowd. The crowd was standing outside what appeared to be a prison. We were protesting Joe Arpaio’s draconian policies on Latinos and immigrants. 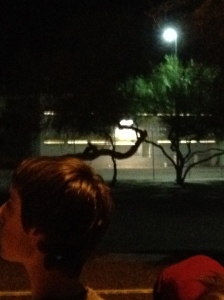 At one point, I strayed over to the chain link fence on the edge of the protest. Across the yard, striped with barbed wire, were small window slits with bright florescent lights inside. Suddenly a figure appeared in the window – a perfect black and white silhouette of a man peering through the glass. He turned and motioned with his hand, and more silhouettes appeared. I was looking into a detention center.

Without much thought, I waved. Without a moment’s pause, he waved back. I got excited. I turned and motioned with my hand, and my friends came over to the fence too. We kept waving. They kept waving back. It was eerie.

Back then, that was as close to the immigration crisis as I’d ever been. I was getting a look into a real political issue. Looking back, I wish I could have called out to him:

“Why Immigration? How did you get there?”

You see, Minor C. Keith was an American businessman who planted a banana tree in 1877. He was trying to find a cheaper way to feed the laborers who were building his uncle’s railroad in Costa Rica. When the government couldn’t pay, they gave Keith 800,000 acres of land for his bananas.[i] The United Fruit Company was born and dominated the regional economy.

In 1954, the Guatemalan president Jacabo Arbenz threatened their business, headed by the Dulles brothers. So, the CIA came to lend a hand. They sponsored a coup and overthrew Arbenz.[ii] The operation went well and the CIA liked it. They liked it so much it became a trend.

When the Soviets arrived to threaten the Panama Canal, the CIA had already propped up a number of right wind dictators in Nicaragua and the Northern Triangle (El Salvador, Guatemala, and Honduras). The Soviets played on populist concerns to rally leftist guerrilla groups like the Sandanistas. Oliver North and the Reagan administration secretly sold weapons to the Iranians to fund their opponents, the Contras, and the whole thing blew up into multiple civil wars – proxy wars between the US and USSR.[iii]

This was in the 70s, when the El Salvadorian conflict alone left over 70,000 people dead in the streets. A tsunami of refugees, in the hundreds of thousands, headed for the US and began the first immigration crisis. Most of them settled in South central Los Angeles,[iv] including one group of teenagers who hung around a 711 on Pico Boulevard. It was 1975.

The crew began by chilling and smoking pot on the corner. None of them were over 18. Then they started going to prison. They went in with dreads and Led Zeplin t-shirts, but emerged with shaved heads and a glimmer in their eyes, having received an education from the hard convicts inside. They began discussing taxes and territories. They started controlling the block, but were crushed by “white contempt” and the Mexican Mafia – the kind you see in Breaking Bad.

The kids had to compete, so they did what they saw in the Civil Wars: they started beheading people. By the end of the 1980s, they controlled a swath of LA. Pico Boulevard was between 12th and 14th street, so they named their gang Mara Salvatrucha 13 or MS13.[v]

Congress took notice. They pressured the Immigration Naturalization Services to start deporting more people. The INS joined with the FBI to create the ‘Violent Gang Task Force’, which spread the anti-immigration sentiment that exist in our politics today.[vi] This was a part of the War on Drugs.

Then congress passed the IRAIRA 104-208 that allowed prisons to deport criminals with sentences longer than one year (before it had been five). As a result, they sent truck fulls of MS13 and M18 gang members into the Northern Triangle, without their criminal records.[vii] It was 1996. MS13 arrived in Central America greeted by a police force as young as they were. The gangs settled in.

Meanwhile, in Mexico, there was a swell in immigration to the US. While the national economy was struggling, the drug trade was booming. The US government had teamed up with Columbia to clamp down on cocaine in South America, and succeeded in dismantling much of the organized crime including Pablo Escobar. That’s when the cartels moved headquarters to Mexico and started conducting business from there, producing the Zetas and the Sinaloas.[viii]

But the US was still on the scent, and in 2006 they teamed up with the Mexican government to crack down on narcotics. Like a tube of toothpaste, they squeezed the cartels South into the Northern Triangle where the cartels met MS13.[ix] MS13 and M18 were warring, territorial gangs. The cartels ran drugs. Thus, a partnership was forged: the cartels paid the gangs who protected their supply chains North. Mind you, this entire process left fields of human atrocities in their wake, but this was only the beginning.

In 2009, Manuel Zelaya was finishing his first term as president of Honduras and wanted to edit the constitution so he could go for round two.[x] The leftist party that elected him wasn’t having any of it, so they called the military and ousted him. Chaos ensued and the military used rightwing parties to prop up a new government, while the US stroked it’s chin; Obama said it “was not legal” but rightwing dictators in Central America did support US interests.[xi]

While the new leaders were cutting their teeth on politics, US law pulled aid and anti-narcotic funding due to the Foreign Assistance Act of 1973.[xii] Authorities began to recede from the countryside, and a vacuum effect occurred. Hence, when the El Salvadorian government brokered a truce between MS13 and M18, in exchange for moving leaders to local prisons, the Mexican cartels moved somewhere with a little more wiggle room for their operations – Honduras.[xiii] It was a perfect storm.

Hurricane Mitch had littered the hills of Honduras with lawless squatter settlements. The government was a fledgling dictatorship, and the US wasn’t running their normal anti-drug campaigns. M18, MS13, and the cartels swooped into Honduras in what experts called the ‘cocaine gold rush’ as the cartels jockeyed for open lanes.[xiv]

The resulting rats nest that emerged from the influx of organized crime would lead to one of the most dire humanitarian crisis the US border has ever seen. It would inspire current day policies under Trump, and define my living situation here in Honduras. It all boiled over in 2012, the same year I was waving to an unknown immigrant in an Arizona detention center. Little did I know, I was heading into the heart of a real human, political, issue.

To be continued in Part 3