Teens in the communities spray MS13 on walls because they think it’s cool. They have little else to do – no jobs, not many fathers – so they either work in the fields or join the club. Gang communities feel claustrophobic. Their streets are tight 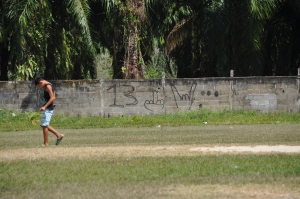 and lean into each other because of the hilly terrain. It’s a maze of dirty concrete walls, iron gates, and dusty streets. They make your skin crawl. And yet, boys who have nowhere to go, and a macho culture breathing down their neck, get indoctrinated, get tattoos, and get paid to muscle people. Then they hear about their forefathers in LA and decide to leave for the US, traveling through MS13 territory in Guatemala and Mexico.

The mindset of migrating away from the violence is everywhere. It permeates everything. People talk about the US like it’s utopia; like everything is clean and everyone is taken care of. A woman asked me to marry her, because she wanted a better life for her three kids of five, seven, and nine. It was the most awkward second date of my life. She was very genuine and just didn’t understand the process. She simply didn’t want her kids in Honduras. I ran into her a few months later. She was talking with a guy who worked in a Rite Aid warehouse in Pennsylvania. They were messaging through a translation app. She was hopeful.

Existing on the fringes of these things makes you want to learn more about what’s driving them. You want to go back to the statistics.

The communities I worked with knew the conflicts of the 70s that created the first immigration crisis. They lived in the shadow of Mexican cartels that created the second. But nothing prepared them for the third crisis; the rat’s nest.

In 2009, the Honduran military woke the president up, put him on a plane, and sent him to Costa Rica. The image of a mustachioed man in his pajamas getting tossed onto a private jet still makes me laugh. The resulting chaos does not.

Freedom of speech, assembly, and association in Honduras plummeted.[i] While 60 percent of the country lived in poverty, 40 percent of police were involved in organized crime. A former congressman, Alfredo Landaverde, claimed that 10 percent of congress was guilty as well. He was assassinated promptly.[ii] President Obama and Secretary of State Hillary Clinton backed the rightwing leader, Juan Orlando, against the world.[iii] By the time Orlando was “elected” in 2013 – with the slogan ‘a soldier on every corner’ – he had the complete support of the US government.[iv] Meanwhile, murders took off.

During the ‘cocaine gold rush’ MS13 gangs camped on the cartel mainlines, making Honduras the “murder capital of the world” with a rate of 90 murders per 100,000 people,[v] the highest rate outside of a war zone. (Venezuela came in 2nd with 53.[vi]) Yoro, where I live, is about average at 45.3 murders – go Yoro.[vii] MS13 prayed on children, forcing them to join and killing their families if they didn’t. The already transnational movement morphed into a monster – a child-eating monster.

The result was a third immigration crisis with a special characteristic, kids. To give you some idea, 6,800 children crossed the border in 2011. By October 2014, there were 68,000 children detained at the border, [viii] reaching beyond a hundred by the end of the year. Most were Honduran. That’s like if 130 high schools in the US sent all their students, on foot to Canada because their parents didn’t want to see them murdered in the hallways. That’s the kind of violence we’re talking about.

I knew one woman who’s 14 year old son was alone in a Texas detention center. He was there for four months before he could get a lawyer. You see, in 2008 President Bush passed a law holding children from non-bordering countries until they could go before an immigration judge and plead asylum.[ix] The wave that crashed onto the US-Mexico border in 2014 caused detention centers to overflow.[x] Three temporary centers had to be built in California, Oklahoma, and Texas.[xi]

FEMA and CBP were overwhelmed. They had no choice but to release families into the streets with orders to show up in immigration courts, which were either confused with permits or ignored entirely.[xii] Immigration courts became backlogged without Bill 744, which congress couldn’t agree on. (Whenever you hear someone mention ‘comprehensive immigration reform’, they’re talking about Bill 744). Hence, the average wait time for a kid to get a lawyer was 35 days.[xiii] And remember we’re talking about a hundred thousand kids, not including adults, aka a cluster-fuck.

The gridlock on Bill 744 centered on the Obama’s 2012 Deferred Action for Childhood Arrivals (DACA), which extended deferment to those who had been in country for five years or more.[xiv] Today, president Trump is trying to navigate around DACA to get at criminals and respond to anti immigration sentiment – of which there seems to be a lot of confusion.

The New York Times reports immigrants are less likely to commit crime than their US peer. They referred to census data from 1980 to 2010 from the Cato institute and National Bureau of Economic research, which recommend immigration policies. The Migration Policy Institute, which does not, was also on their list. NYT interviewed Randy Capps, their CEO, who has studied immigration since 1993.[xv] Left leaning satirists like Seth Myers and Stephen Colbert refer to this article frequently.

Confused? The nuance is subtle. NYT is mostly talking about legal and illegal immigrants from the first two waves. Fox is drawing their own conclusions from patterns in the data, and referring strictly to illegals. In the end, however, you choose whom to believe. President Trump prefers Fox News.

The Department of Homeland Security just sent out two memos signed by secretary John Kelly. The memos expand detention centers and prohibit releasing migrants with court orders. It expands fast tracks to deportation and adds over 5,500 boots on the border. It allows any immigration official to deport someone deemed a ‘risk to public safety or national security’ without going before a judge.[xix] In other words, a lot of young men have a good chance of being sent back to the rats nest – kind of like the 1970s, although ICE claims it’s including criminal records with deported prisoners this time.[xx]

And the statistics keep coming:

Mexican’s still make up 28 percent of the 42 million foreign born migrants in the United States, and more are leaving than coming.[xxi] Silicon valley is freaking out because of the clamp on H-1B visas that let them fill half a million high tech jobs that Americans aren’t educated for.[xxii] ICE has removed 240,255 illegal immigrants and claimed the ‘vast majority’ of the 65,332 inside the border were criminals[xxiii] Meanwhile, the violence is shifting in the Northern triangle.

Statistics say that 80 percent of migrants were aware of Obama’s deterrence messaging before attempting to migrate and still felt it was worthwhile. Statistics say that victims of violence are more likely to attempt the crossing.[xxiv] Statistics say that in 2015, there were 17,422 murders in the Northern triangle, although the violence is shifting away from Honduras and back into El Salvador, where the truce between MS13 and M18 has broken,[xxv] and a police force of 20 thousand is facing off against a gang army that’s 60 thousand strong.[xxvi] The UN Refugee Agency is still saying it’s a refugee crisis and not a migrant crisis.[xxvii] Taxi drivers are still bitching to me about the $15 war tax they pay the gangs every week. Neighborhood kids are still complaining about getting hassled by the police and put in newspaper line ups.

Clients say it’s rough, my coworkers say someone else left for the US, my news feed says immigration is right and wrong, and I’m screaming STOP-STOP-STOP… fuck. This is too much for one blog.

Let’s wrap it up.

If by the end of this series you feel like the question of Why Immigration is less close to an answer than it was before, then I’ve done my job. The secret objective of this blog was to bring you, the reader, inside the political issue; the one I’m sitting in, here in Honduras; the one we hear so much about, but only occasionally see the faces of, unless you’re on an awkward second date, or passing graffiti on a community wall. I’ve been trying to overwhelm you, because when we hear it in the news, we just get a quick list of buzzwords and feelings that define the issue for us.

The word ‘immigration’ is like the flag planted in the ice, drawing our attention to only the tip of the iceberg, when below the surface, in the murky depths of history, we find a colossal mass of human life, and at the bottom is some dude named Keith.